Sometimes he was so overwhelmed

By the percussive power of his own soul that he hit in the shut-eye song, concentration deep,

in a dark well of hours,

sweat moving on the waters

towards some apex of umbilical light

where he became a mood a vibration the resonance of wood

a man made of earth

frets and wings of flying things,

But what is a drum?

A drum is a moon

a drum is a heel

a drum is a beat to bleed in

a drum is the earth

and what is the earth

the sound of a drum

the sound of our souls colliding.

His joy was as hard as time

painful to earn/transcendent in tears and years.

He had come in beads and robes,

he had walked across the desert from the Niger Bend

but then he fell of his stool and lost himself in the song,

hard to mend, the river bend. He had been singing

of the zodiac, he had been strumming his

steel strung drum, he had been ringing the bell of his heart. He was made of earth and wood and stone

and branches and bone and field hollers and moans

He was a man among men

and when he shook your hand you knew

that he had penetrated deep into the mangrove with large hands, the swamplands,

he had gone deep into some wild island jungle.

`Stay with us’, we cried, but he was always here.

`Stay with us’, but we were the ones who were leaving.

And he sat on the old stump of a Cedar tree

rooted in the dark dirt, muted by the blues and sadness of the world.

But he could make them sound

that even hummingbirds may rest for a while

in the palms of his hands.

He had silver rings on each finger.

And when he sings the clouds would move

With his breath exhale

In the litmus of magic

To the frequency of magic

to feet beating the earth to freedom. He lay deep in the groove,

so far back that we forgot he was there

and we went on grinning and grinding

and shucking and jiving

against sweaty walls, in European halls

forgetting that in fact we were naked

be dense with fury, be dynamic be fierce, be devious, be brazen be wailing in the weeping.

Sometimes he sang so deep that he didn't even know

that he was standing on the bottom of the sea

reaching up, to catch us from falling. What is a drum?

a drum is the pulse of sex and oil and heat

a drum is the skin

a drum is alive

a drum is to play, but not to beat

or be beaten, the funk between the meat

to sweeten the heat

a drum is a beat, be the drum be the rhythm, be the groove 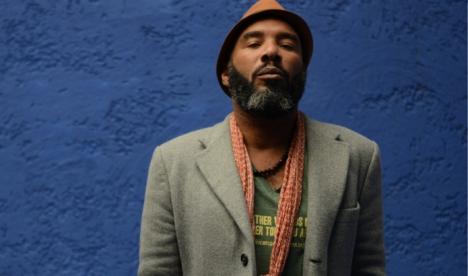